“Svengoolie” presents his big broadcast of “The Brides of Dracula” (1960), this Sat. on Me-TV

Fellow Svengoolie SvenPals everywhere will be jumping for joy for his upcoming big broadcast of a classic Hammer Films–Universal Studios horror/monster masterpiece.

“Svengoolie” presents his big broadcast of “The Brides of Dracula” (1960) 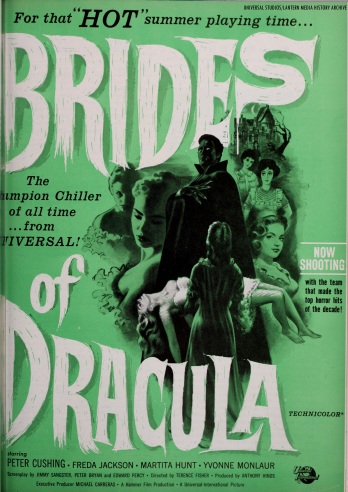 “For that ‘hot’ summer playing time!” Original 1960 Universal Studios exhibitors’ ad for “The Brides of Dracula.”

The legendary Berwyn/Chicago-based horror/monster film host will present his big broadcast of “The Brides of Dracula” (1960), this Sat.; July 11 at 8 p.m. Eastern/7 p.m. Central on Me-TV.

The 1960 Hammer-Universal “Dracula” monster-horror masterpiece was directed by veteran Hammer director Terence Fisher.   Fisher’s other Hammer horror masterpieces include “The Curse of Frankenstein” (1957), “Horror of Dracula” (1958), the latter Universal/Hammer screen adaptation of  “The Mummy” (1959), “The Two Faces of Dr. Jekyll” (1960) and “The Gorgon” (1964).  Fisher’s 1960 Hammer “Dracula” entry was produced by veteran Hammer producers Michael Carreras, Anthony Hinds and Anthony Nelson Keys.  Hinds also served in an uncredited position for co-writing the screenplay for “The Brides of Dracula”  (1960), with veteran Hammer screenwriters Jimmy Sangster, Edward Percy and Peter Bryan.

Who was in Terence Fisher’s Hammer-Universal production of “The Brides of Dracula” (1960)?

The players who appeared in Fisher’s 1960 Hammer-Universal production of “The Brides of Dracula” were Peter Cushing (as Dr. Van Helsing, the legendary Hammer horror personality previously played the role of Van Helsing opposite legendary Hammer horror personality Christopher Lee as Count Dracula in Fisher’s 1958 Hammer-Universal classic monster adaptation masterpiece, “Horror of Dracula” ), Martita Hunt (as Baroness Meinster), Yvonne Monlaur (as Marianne Danielle, Monlaur also appeared in the 1960 Hammer-Columbia adventure thriller with Christopher Lee, “Terror of the Tongs” (1960), Andree Melly (as Gina), Freda Jackson (as Greta), David Peel (as Baron Meinster), Miles Malleson (as Dr. Tobler, Malleson previously appeared in the role of the undertaker Marx in 1958’s “Horror of Dracula” with Cushing and Lee), Henry Oscar (as Herr Lang), Mona Washbourne (as Frau Lang), Victor Brooks (as Hans), Fred Johnson (as Cure), Michael Ripper (as a coachman),  Vera Cook (as the landlord’s wife), Marie Devereux (as a village girl) and Norman Pierce (as a landlord).

END_OF_DOCUMENT_TOKEN_TO_BE_REPLACED

“Svengoolie” to present “The Revenge of Frankenstein” (1958), this Sat. on Me-TV 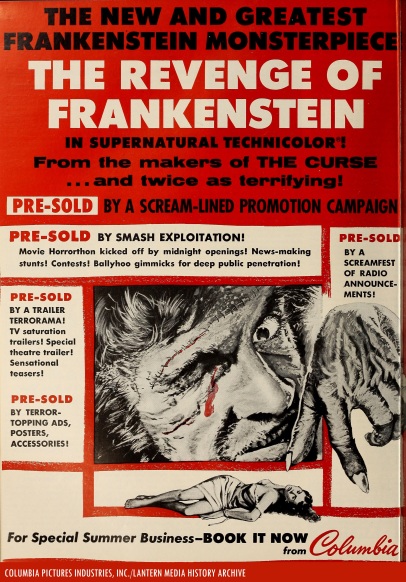 “Pre-sold by a trailer ‘terrorama’!” 1958 Columbia Pictures exhibitors’ trade ad for “The Revenge of Frankenstein.”

The legendary Berwyn/Chicago-based monster/horror film host will present his big broadcast showcase of “The Revenge of Frankenstein” (1958), this Sat., Nov. 15 at 8 p.m. Eastern/7 p.m. Central on Me-TV.

For the original North American theatrical release of “The Revenge of Frankenstein” in June 1958, Columbia presented Fisher’s second Hammer “Frankenstein” production as a double-feature presentation with Jacques Tourneur‘s Sabre production of “Curse of the Demon” (1957, with Dana Andrews); according to John M. Miller’s Turner Classic Movies article on “The Revenge of Frankenstein.”  This was one of 16 Columbia-Hammer co-productions.

This will mark Svengoolie’s second big coast-to-coast broadcast of “The Revenge of Frankenstein” (1958) on Me-TV, he previously premiered Fisher’s 1958 Columbia-Hammer monster entry on the airlanes of Me-TV back in March 2018.  According to IMDB, Sven also aired “The Revenge of Frankenstein” (1958) on his hometown station in Chicago/Berwyn; WCIU-TV 26/”The U” back in Feb. 2010.  According to fellow super SvenPal David Fuentes’ official “Terror From Beyond the Dave” YouTube site, Sven also showcased the 1958 Columbia/Hammer monster classic on WCIU back in Jan. 2011.

Who was in Terence Fisher’s Columbia-Hammer production of “The Revenge of Frankenstein” (1958)?

The players who appeared in Fisher’s Columbia-Hammer monster/horror production of “The Revenge of Frankenstein” (1958) were Peter Cushing (as Baron Frankenstein/Dr. Victor Stein; Cushing previously played the role of Victor Frankenstein in Fisher’s Hammer production of “The Curse of Frankenstein” in 1957), Eunice Gayson (as Margaret), Michael Gwynn (as Karl; Gwynn later appeared in the guest role of Lord Melbury in the BBC pilot episode of John Cleese’s “Fawlty Towers,” “A Touch of Class” in 1975), Lionel Jeffries (as Fritz), Francis Matthews (as Dr. Hans Kleve), John Stuart (as the inspector), John Welsh (as Bergman), Michael Ripper (as Kurt), Arnold Diamond (as Molke) and George Woodbridge (as a janitor).

END_OF_DOCUMENT_TOKEN_TO_BE_REPLACED

Fellow Svengoolie SvenPals everywhere will be interested in the return of a cult seaside thriller that was independently produced and released in the late 1970s. 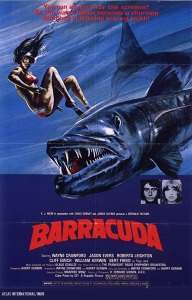 The legendary Berwyn/Chicago-based horror/thriller film host will present the return of “Barracuda” (1978), this Sat., July 21 at 8 p.m. Eastern/7 p.m. Central on Me-TV.

The 1978 thriller was directed by Harry Kerwin*, who also worked as an actor throughout his brief cinematic career (“Barracuda” was Kerwin’s final production, he died on June 2, 1979).   The Atlas International film was released theatrically in the United States by Republic Industries under the “Republic Pictures” moniker.  The aforementioned incarnation of Republic Pictures had no connection to the original Republic Pictures corporation and the original Republic film catalog, which was acquired by National Telefilm Associates/NTA in 1967 (NTA purchased the Republic trademarks in 1984 and renamed themselves after the former studio).

This will mark Sven’s second broadcast of “Barracuda” (1978) on Me-TV.  He had previously showcased the Harry Kerwin feature back in Nov. 2017.

END_OF_DOCUMENT_TOKEN_TO_BE_REPLACED

“Svengoolie” to showcase “The Revenge of Frankenstein” (1958), this Sat. on Me-TV

Fellow Svengoolie SvenPals everywhere will be jumping for joy about his upcoming showcase of a 1958 monster feature produced by Britain’s Hammer Films. 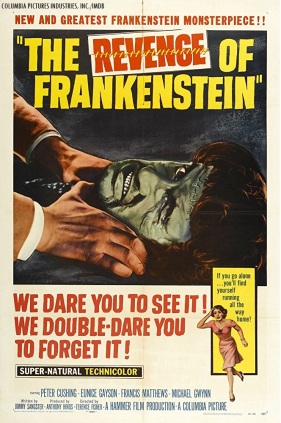 Original 1958 Columbia Pictures poster for the North American release of “The Revenge of Frankenstein.”

The legendary Berwyn/Chicago-based horror film host will showcase “The Revenge of Frankenstein” (1958), this Sat., March 3 at 8 p.m. Eastern/7 p.m. Central on Me-TV.

The second Hammer “Frankenstein” installment was released in the United States and Britain by Columbia Pictures.  According to the American Film Institute’s film database entry, “The Revenge of Frankenstein” was one of 16 Hammer features distributed by Columbia.

The players who appeared in Fisher’s 1958  “Frankenstein” monster feature were Peter Cushing (as Baron Frankenstein, a.k.a. Dr. Victor Stein), Francis Matthews (as Dr. Hans Kleve), Eunice Gayson (as Margaret), Michael Gwynn (as Karl), John Welsh (as Bergman), Lionel Jeffries (as Fritz), John Stuart (as the inspector), Arnold Diamond (as Molke), George Woodbridge (as a janitor), and Michael Ripper (as Kurt).

END_OF_DOCUMENT_TOKEN_TO_BE_REPLACED

Fellow Svengoolie SvenPals from coast-to-coast will be looking forward to his upcoming premiere of a cult underwater cinematic thriller entry. 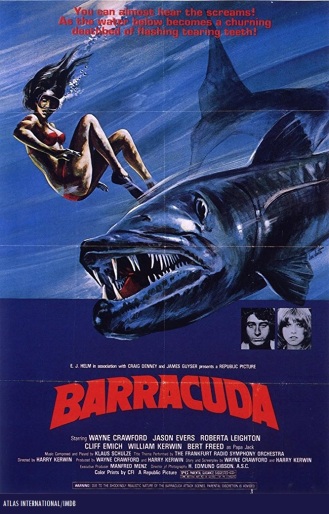 The players who appeared in “Barracuda” were Wayne David Crawford (as Mike Canfield), Jason Evers (as Dr. Elliot Snow), Roberta Leighton (as Liza Williams), Cliff Emmich (as Deputy Lester), William Kerwin (as Sherriff Ben Williams), Barbara Keegan (as Maggie Snow, Keegan was credited as Bobbie Ellyne Kosstrin in the film), Bert Freed (as Papa Jack), Denise Taylor (as a student), Rick Rhodes (as a government agent) and Harry Kerwin (as a government agent).

In addition to playing the role of Mike Canfield in “Barracuda,” Wayne David Crawford also directed the underwater sequences for Harry Kerwin’s film.   Crawford also co-wrote the screenplay with Kerwin, according to additional details from IMDB.

William Kerwin, who played Sherriff Ben Williams in the film was the older brother of Harry Kerwin.  According to his IMDB profile, the elder Kerwin appeared in bit roles in numerous films and television series throughout his screen career, notably in Herschell Gordon Lewis’ horror flicks.

END_OF_DOCUMENT_TOKEN_TO_BE_REPLACED

Now that Halloween is almost here, fellow Svengoolie SvenPals will be excited for his upcoming showcase of a 1960 Hammer horror film that was released by Universal. 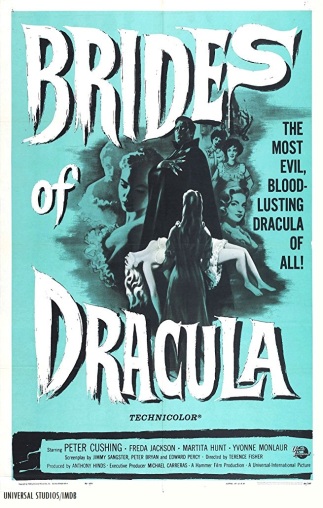 1960 Universal Studios poster art for “The Brides of Dracula.”

The legendary Berwyn/Chicago-based horror film host will be showing the 1960 film “The Brides of Dracula,” this Sat., Oct. 28 at 8 p.m. Eastern/7 p.m. Central on Me-TV.

According to additional research from the Monster Kid Classic Horror Forum, the film was shown during Sven’s first nationwide Me-TV telecast on April 2, 2011.

Who was in “The Brides of Dracula?”

END_OF_DOCUMENT_TOKEN_TO_BE_REPLACED

Fellow Svengoolie pals from coast-to-coast will be jumping for joy this Sat. as he will showcase one of the definitive Universal Studios monster classics. 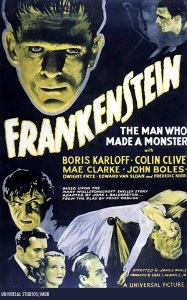 This will mark Sven’s fourth nationwide broadcast of the 1931 Universal monster classic.  He had previously showcased ‘Frankenstein” back in Nov. 2013, Nov. 2014 and Oct. 2015 on Me-TV.

The players who appeared in James Whale’s “Frankenstein” were Boris Karloff (as Frankenstein’s monster), Colin Clive (as Dr. Henry Frankenstein), Mae Clarke (as Elizabeth), John Boles (as Victor), Edward Van Sloan (who played the dual roles of Dr. Waldman and the prologue announcer), Dwight Frye (as Fritz), Marilyn Harris (as Maria), Frederick Kerr (as Baron Frankenstein) and Francis Ford (as Hans, who did not receive any screen credit in the film).

Shortly before he made his appearance as Frankenstein’s monster in Whale’s film, Karloff played the role of tabloid reporter T. Vernon Isopod in the film “Five Star Final” (1931, alongside Edward G. Robinson) at rival studio Warner Bros. Pictures (under the “First National-Vitaphone” banner).

END_OF_DOCUMENT_TOKEN_TO_BE_REPLACED

Fellow Svengoolie pals will be cheering for joy this weekend as he will showcase a 1953 Universal Studios cinematic sci-fi masterpiece.

1953 Universal Studios trailer for “It Came from Outer Space.” 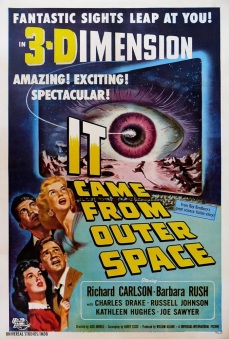 1953 Universal Studios poster art for “It Came from Outer Space.”

The film was directed by Jack Arnold, who also worked on “Creature from the Black Lagoon” (1954), “The Incredible Shrinking Man” (1957) and “Monster on the Campus” (1958).   The story was written by science fiction writer Ray Bradbury and the screenplay adaptation was written by Harry Essex.

This will mark Sven’s third broadcast of “It Came from Outer Space.”  He had previously showcased Arnold’s film back in May 2014 and Oct. 2015 on Me-TV.

END_OF_DOCUMENT_TOKEN_TO_BE_REPLACED

“Svengoolie” to showcase “Medusa against the Son of Hercules” (1963), this Sat. on Me-TV (in primetime)

Fellow Svengoolie pals will be looking forward to his upcoming primetime premiere of a 1963 creature/sword-and-sandal adventure film from Italy.

Svengoolie presents: “Medusa against the Son of Hercules” (1963) 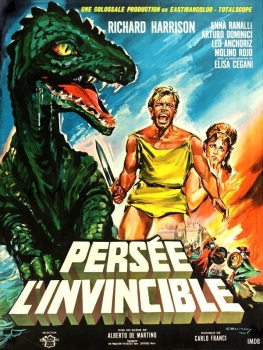 1963 French poster art for “Medusa against the Son of Hercules/Persée l’invincible.”

The legendary Chicago/Berwyn-based horror film host will be showcasing “Medusa against the Son of Hercules” (1963), this Sat., Nov. 9 at 8 p.m. Eastern/7 p.m. Central on Me-TV.

Sven’s premiere of “Medusa against the Son of Hercules” will be part of his new Me-TV primetime slot during the network’s revamped “Super Sci-Fi Saturday Night” lineup.  The film was directed by Alberto De Martino.

Who was in “Medusa against the Son of Hercules?”

The players who appeared in De Martino’s feature were Richard Harrison (as Perseo/Perseus), Anna Ranalli (as Andromeda), Arturo Dominici (as Acrisio), Leo Anchóriz (as Galenore), Antonio Molino Rojo (as Tarpete, credited as Molino Rojo in the film) and Roberto Camardiel (as Cefeo).

Two years before production began on “Medusa against the Son of Hercules,” Richard Harrison appeared in De Martino’s “The Invincible Gladiator” (1961).  One of Harrison’s earliest feature film roles was in the 1958 film adaptation of the Richard Rodgers-Oscar Hammerstein musical, “South Pacific” (he played a co-pilot).

END_OF_DOCUMENT_TOKEN_TO_BE_REPLACED

Fellow Svengoolie fans will be in for a treat this weekend as he will be presenting a 1957 fantasy adventure film from Universal Studios. 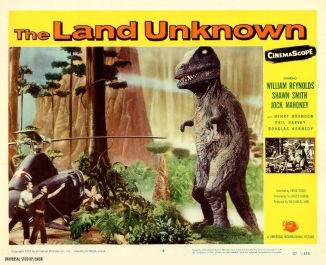 The legendary Berwyn/Chicago-based horror host will be showing “The Land Unknown,” this Sat., July 22 at 10 p.m. Eastern/9 p.m. Central on Me-TV.

“The Land Unknown” was directed by Virgil Vogel, who also directed “The Mole People” for the studio in 1956 (which was also previously showcased by Sven).  That same year, Vogel also directed the final film in Universal’s “Ma and Pa Kettle” comedy series, “The Kettles on Old MacDonald’s Farm.”