Fellow Svengoolie SvenPals will be excited about his upcoming premiere of a Columbia Pictures mystery-thriller from one of the masters of macabre cinema gimmicks.

END_OF_DOCUMENT_TOKEN_TO_BE_REPLACED

“Svengoolie” to premiere “Have Rocket, Will Travel” (1959, featuring “The Three Stooges”), this Sat. on Me-TV

Fellow Svengoolie SvenPals everywhere will be interested in his upcoming premiere of a 1959 Columbia Pictures feature-length space farce with a familiar comedy trio.

Original Columbia Pictures theatrical trailer for “Have Rocket, Will Travel” (1959, with “The Three Stooges”). 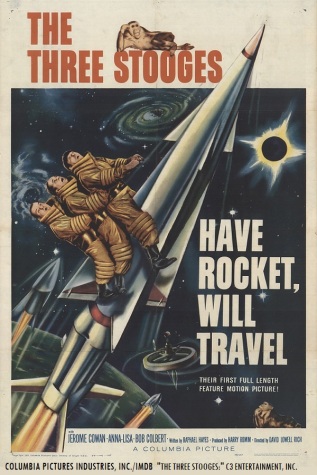 1959 Columbia Pictures poster art for “Have Rocket, Will Travel” with “The Three Stooges.”

The legendary Chicago/Berwyn-based sci-fi/horror film host will present his premiere of “The Three Stooges” in “Have Rocket, Will Travel” (1959), this Sat., April 21 at 8 p.m. Eastern/7 p.m. Central on Me-TV.

The players who appeared in Rich’s space-age Columbia “Stooges” comedy were Moe Howard (as Moe), Larry Fine (as Larry), “Curly” Joe DeRita (as Curly Joe), Jerome Cowan (as J.P. Morse), Anna Lisa (as Dr. Ingrid Naarveg), Robert “Bob” Colbert (as Dr. Ted Benson), Don Lamond (in his three roles as the voice of the Venusian Robot, the narrator of the film and a reporter), Marjorie Bennett (in an uncredited role as Mrs. Hermine Huntingford) and Dal McKennon (in an uncredited role as the voice of the Unicorn).

END_OF_DOCUMENT_TOKEN_TO_BE_REPLACED

Fellow Svengoolie SvenPals and aficionados of classic comedy will be excited about his upcoming presentation of a 1953 entry with Universal Studios’ legendary comedic duo!

END_OF_DOCUMENT_TOKEN_TO_BE_REPLACED

Fellow coast-to-coast Svengoolie SvenPals will be excited about his upcoming big broadcast premiere of a cult fantasy-adventure creature feature.

The beloved Chicago/Berwyn-based horror host will present his premiere of “Dinosaurus!” (1960), this Sat., April 7 at 8 p.m. Eastern/7 p.m. Central on Me-TV.

“Dinosaurus!” was directed by Irvin S. Yeaworth Jr. and was produced by Jack H. Harris.  Outdoor sequences were filmed on the island of St. Croix, Virgin Islands (according to the American Film Institute’s article on “Dinosaurus!”). The feature was originally released to theaters by Universal Studios in 1960.

The players who appeared in “Dinosaurus!” were Ward Ramsey (as Bart Thompson), Kristina Hanson (as Betty Piper),  Paul Lukather (as Chuck), Alan Roberts (as Julio), Fred Engelberg (as Mike Hacker), Lucita Blain (as Chica),  Wayne C. Treadway (as Dumpy), Howard Dayton (as Mousey), Jack Younger (as Jasper), James Logan (as T.J. O’Leary), Wilhelm Samuel (as a townsman) and Gregg Martell (as the Neanderthal).