“Svengoolie” presents his big broadcast of “The Evil of Frankenstein” (1964), this Sat. on Me-TV

Fellow Svengoolie SvenPals from coast-to-coast will be jumping for joy for his upcoming big broadcast of a Universal Studios–Hammer Films monster/horror classic.

“Svengoolie” presents his big broadcast of “The Evil of Frankenstein” (1964)

Original 1964 Universal Studios theatrical poster art for the Hammer co-production of “The Evil of Frankenstein.”

The legendary Berwyn/Chicago-based monster/horror film host will present his big broadcast showcase of “The Evil of Frankenstein” (1964), this Sat., Aug. 3 at 8 p.m. Eastern/7 p.m. Central on Me-TV.

The screenplay for “The Evil of Frankenstein” was written by veteran Hammer screenwriter Anthony Hinds, who received screen credit under the pseudonym of John Elder; according to IMDB.

This will mark Sven’s fourth coast-to-coast big broadcast of Francis’ 1964 Universal-Hammer “Frankenstein” monster entry on Me-TV.  He previously showcased “The Evil of Frankenstein” back in Nov. 2013, June 2014 and March 2015.

The players who were in Francis’ 1964 Universal-Hammer “Frankenstein” feature were Peter Cushing (as Baron Frankenstein), Ernest “Kiwi” Kingston (as Frankenstein’s monster), Peter Woodthorpe (as Zoltan), Katy Wild (as the beggar girl), Sandor Elès (as Hans), Duncan Lamont (as the chief of police), Anthony Blackshaw and David Conville (as policemen),  David Hutcheson (as the Burgomaster), Caron Gardner (as the wife of the Burgomaster), James Maxwell (as the priest) and Howard Goorney (as the drunk).

END_OF_DOCUMENT_TOKEN_TO_BE_REPLACED

“Svengoolie” to present his big broadcast premiere of “Forbidden Planet” (1956), this Sat. on Me-TV from coast-to-coast

Fellow Svengoolie SvenPals everywhere will be jumping for joy for his big broadcast premiere of a classic Metro-Goldwyn-Mayer sci-fi masterpiece.

In his home area of Berwyn/Chicago, Sven previously showcased the 1956 MGM sci-fi masterpiece on WCIU-TV 26/”The U” back in Nov. 1995; according to fellow super SvenPal David Fuentes and his official “Terror From Beyond the Dave” YouTube channel.

“Forbidden Planet” (1956) was directed by veteran MGM director Fred M. Wilcox (who was credited under his full name of Fred McLeod Wilcox, according to IMDB).  The screenplay for “Forbidden Planet” (1956) was written by Cyril Hume and was adapted from Allen Adler and Irving Block’s story treatment.  Adler and Block’s treatment was lifted from William Shakespeare’s play, “The Tempest.”

The players who appeared in “Forbidden Planet” were Walter Pidgeon (as Dr. Morbius), Anne Francis (as Altaira Morbius), young Leslie Nielsen (as Commander Adams), Jack Kelly (as Lt. Farman), Warren Stevens (as Lt. “Doc” Ostrow), Richard Anderson (as Chief Quinn), James Drury (as Crewman Strong), Earl Holliman (as the cook), George Wallace (as the Bosun), Robert “Bob” Dix (as Crewman Grey), Morgan Jones (as Crewman Nichols), Roger McGee (as Crewman Lindstrom), Les Tremayne (in an uncredited role as the opening narrator) and “Robby the Robot” (as himself, with Marvin Miller in an uncredited role as the voice of “Robby” and stunt performer Frankie Darro in the “Robby” costume).

END_OF_DOCUMENT_TOKEN_TO_BE_REPLACED

“Svengoolie” to present his big broadcast of “Village of the Giants” (1965), this Sat. on Me-TV

Fellow Svengoolie SvenPals will be jumping for joy from coast-to-coast for his big broadcast return of a cult comedic sci-fi/fantasy classic.

“Svengoolie” presents his big broadcast of “Village of the Giants” (1965) 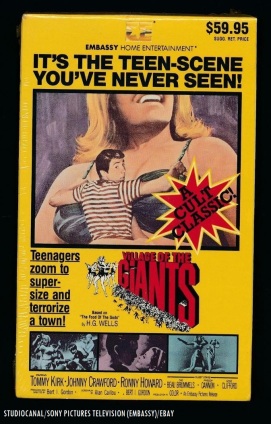 The legendary Berwyn/Chicago-based sci-fi/fantasy film host will present his big broadcast showcase of “Village of the Giants” (1965), this Sat., July 20 at 8 p.m. Eastern/7 p.m. Central on Me-TV.

The 1965 feature was directed by veteran cult film director Bert I. Gordon, who was known for “King Dinosaur” (1955), “Beginning of the End” (1957), “The Amazing Colossal Man” (1957), “Attack of the Puppet People” (1958), “War of the Colossal Beast” (the 1958 sequel to “The Amazing Colossal Man”), “The Magic Sword” (1962) and “Empire of the Ants” (1977).  Gordon was inspired by H.G. Wells’ novel, “The Food of the Gods.”  Gordon’s “Village of the Giants” was released theatrically by veteran film distributor Joseph E. Levine and his Embassy Pictures organization (according to the American Film Institute).

This will mark Sven’s second coast-to-coast big broadcast of Gordon’s 1965 Embassy sci-fi feature on Me-TV.  He previously showcased “Village of the Giants” back in Jan. 2019.  In his hometown of Berwyn/Chicago, Sven previously aired Gordon’s 1965 entry on WCIU-TV 26/”The U” in Sept. 2008 (according to IMDB).

Who was in Gordon’s 1965 Embassy sci-fi/comedy entry?

The players who appeared in “Village of the Giants” (1965) were Ron “Ronny” Howard (as Genius, Howard’s best-known acting roles include his characters of Opie Taylor on “The Andy Griffith Show” from 1960-68 and Richie Cunningham on “Happy Days” from 1972-80, with guest cameos in 1983 and in the finale in 1984; he later became a successful film director), Beau Bridges (as Fred, Bridges later appeared in 1971’s  “The Last Picture Show,” 1979’s “Norma Rae” with Sally Field and the remainder of “Stargate: SG-1” from 2005-07), Johnny Crawford (as Horsey, Crawford previously played the role of Mark McCain in the 1958-63 Chuck Connors western series; “The Rifleman”), Tommy Kirk (as Mike, Kirk appeared in numerous live-action Disney and American-International films throughout his career), Joy Harmon (as Merrie),  Freddy “Boom Boom” Cannon (as himself, Cannon’s portfolio of hit songs include 1959’s “Tallahassee Lassie,” “Way Down Yonder In New Orleans,” 1962’s “Palisades Park” 1965’s “Action” and his 2016 smash hit song with Svengoolie, “The Svengoolie Stomp”), Toni Basil (as Red, the future dancer-choreographer-singer was later known for her 1981 hit; “Mickey”), The Beau Brummels (as themselves, their portfolio of hit songs include 1964’s  “Laugh, Laugh” and 1965’s “Just a Little” ), Rance Howard (as a deputy, he was the father of Ron Howard), Tim Rooney (as Pete, the junior Rooney was the son of actor Mickey Rooney), Charla Doherty (as Nancy), Robert “Bob” Random (as Rick), Gail Gilmore (as Elsa), Tisha Sterling (as Jean), Joe Turkel (as a sheriff), feline film personality Orangey (in an uncredited role as a giant cat, Orangey previously appeared 1951’s “Rhubarb” and 1955’s “This Island Earth”) and Hank Jones (as Chuck).

END_OF_DOCUMENT_TOKEN_TO_BE_REPLACED

“Svengoolie” to present his big broadcast premiere of “The Curse of the Mummy’s Tomb” (1964), this Sat. on Me-TV

Fellow Svengoolie SvenPals everywhere will be jumping for joy for his big broadcast premiere of a classic Hammer Films–Columbia Pictures monster/horror feature.

Original 1964 Columbia Pictures/Hammer Films theatrical trailer for “The Curse of the Mummy’s Tomb.”

The legendary Berwyn/Chicago-based monster/horror film host will present his big broadcast premiere of “The Curse of the Mummy’s Tomb” (1964), this Sat., July 13 at 8 p.m. Eastern/7 p.m. Central on Me-TV.

The 1964 feature was directed by veteran Hammer producer-director-writer Michael Carreras, who was the son of Hammer studio head James Carreras; according to Rob Nixon’s article on “The Curse of the Mummy’s Tomb” (1964) for Turner Classic Movies.  The junior Carreras produced numerous Hammer horror features throughout his film career, including “The Curse of Frankenstein” (1957),  “Horror of Dracula” (1958), “The Mummy” (1959), “The Two Faces of Dr. Jekyll” (1960) and “The Curse of the Werewolf” (1961).

END_OF_DOCUMENT_TOKEN_TO_BE_REPLACED

A happy/safe Independence Day/Fourth of July to all from the author of “Silver Screen Reflections!” -C.H.

Fellow Svengoolie SvenPals everywhere will be jumping for joy for his big broadcast showcase of a classic Columbia Pictures thriller from cinema’s macabre legend.

This will mark Sven’s third big broadcast presentation of “Mr. Sardonicus” (1961) from coast-to-coast on Me-TV.  He previously aired the 1961 Castle-Columbia macabre thriller classic back in April 2018 and Nov. 2018.