Happy Halloween from the writer of “Silver Screen Reflections”

Svengoolie (from his WFLD days as the “Son of Svengoolie”) and Doug Graves performing “Trick-Or-Treat Blues” (a parody of Eddie Cochran’s ” Summertime Blues”), from Rick Thomas’ YouTube channel. 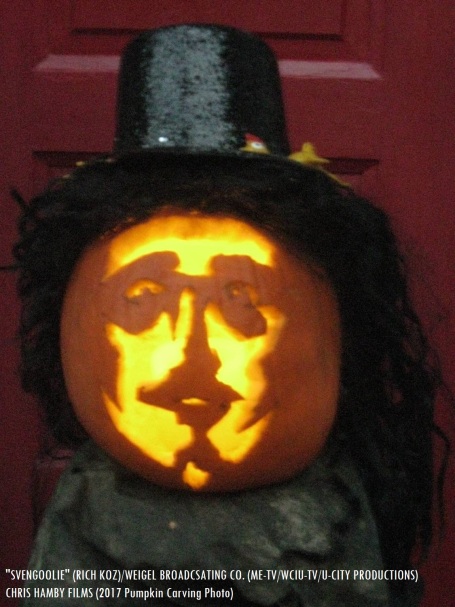 My Svengoolie pumpkin for 2017!

Happy Halloween greetings to all from the writer of “Silver Screen Reflections!”  Whether you’re trick-or-treating, going to a fun costume party, showing your jack-o’-lantern carvings or watching your favorite horror/thriller/monster/creature feature film, I  hope everyone from coast-to-coast is having a fun, exciting and safe Halloween!  Kudos and peace!

Fellow Svengoolie SvenPals from coast-to-coast will be jumping for joy this Sat. as he will showcase a 1957 Universal Studios insect creature feature. 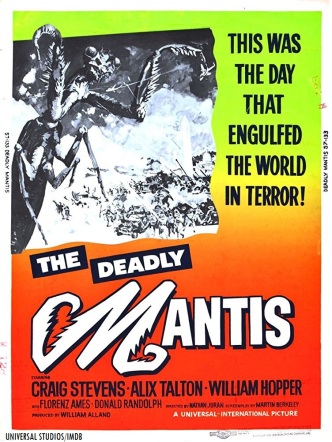 END_OF_DOCUMENT_TOKEN_TO_BE_REPLACED

1925 MGM (under the “Metro-Goldwyn” moniker) Australian publicity ad for “The Monster.”

The senior Lon Chaney played the role of Dr. Ziska in Roland West’s 1925 silent, “The Monster.”  In addition to Chaney, the players who appeared in West’s film were Gertrude Olmstead (as Betty Watson), Hallam Cooley (as Watson’s head clerk), Johnny Arthur (as the under clerk), Frank “George” Austin (as Rigo), Charles A. Sellon (as the constable), Knute Erickson (as Daffy Dan) and Walter James (as Caliban).

West’s film was based off of the stage play of the same name by Crane Wilbur.  Wilbur later wrote the screenplay for the 1953 Warner Bros. 3-D thriller “House of Wax,” which featured Vincent Price.

END_OF_DOCUMENT_TOKEN_TO_BE_REPLACED

Now that Halloween is almost here, fellow Svengoolie SvenPals will be excited for his upcoming showcase of a 1960 Hammer horror film that was released by Universal.

1960 Universal Studios poster art for “The Brides of Dracula.”

The legendary Berwyn/Chicago-based horror film host will be showing the 1960 film “The Brides of Dracula,” this Sat., Oct. 28 at 8 p.m. Eastern/7 p.m. Central on Me-TV.

According to additional research from Sven’s April 2011 post on “The Brides of Dracula” (from his official website), the film was shown during his first nationwide Me-TV telecast on April 2, 2011.

Who was in “The Brides of Dracula?”

END_OF_DOCUMENT_TOKEN_TO_BE_REPLACED

“Best of RiffTrax Live: Night of the Living Dead” to be shown in select theaters for one night only on Wed., Oct. 25

Fellow fans of RiffTrax, vintage/cult horror films and “Mystery Science Theater 3000” (MSTies) be interested in an upcoming cinematic event to kick off Halloween.

Poster for the RiffTrax version of “Night of the Living Dead” (which will be re-broadcast in select theaters on Wed., Oct. 25).

RiffTrax, in conjunction with Fathom Events will be presenting “Best of RiffTrax Live: Night of the Living Dead” (featuring MST3K alums Mike Nelson, Kevin Murphy and Bill Corbett) in select theatrical venues from coast-to-coast for one night only on Wed., Oct. 25 at 7:30 p.m. (local time).

The RiffTrax crew and their live riffing presentation of George A. Romero’s “Night of the Living Dead” (1968) was originally broadcast in select cinema venues from coast-to coast in Oct. 2013, according to the official Fathom Events press release.

Bill Cardille was best known as a longtime personality on Pittsburgh television.  From 1964 to 1983, he hosted the WIIC/WPXI-TV “Chiller Theater” showcase of vintage horror films, under the nickname of “Chilly Billy” Cardille (according to Maria Sciullo and Anya Sostek’s Pittsburgh-Post Gazette article on the death of Cardille in July 2016).    Cardille reprised his role of the TV news reporter in Tom Savini’s 1990 remake of “Night of the Living Dead.”

END_OF_DOCUMENT_TOKEN_TO_BE_REPLACED

Fellow Svengoolie SvenPals from coast-to-coast will be excited about his upcoming showcase of a vintage 1955 cinematic creature thriller from Universal Studios.

“Tarantula” was directed by veteran Universal horror director Jack Arnold, who also worked on “It Came from Outer Space” (1953), “Creature from the Black Lagoon” (1954) and “The Incredible Shrinking Man” (1957).

This will mark Sven’s fourth showing of the 1955 Universal creature feature on Me-TV.  He had previously showcased “Tarantula” back in Aug. 2011 (two years before Me-TV came into the Washington, D.C./Frederick market), Feb. 2014 and Nov. 2015.

END_OF_DOCUMENT_TOKEN_TO_BE_REPLACED

Fellow Svengoolie SvenPals will be looking forward to his upcoming showcase of a 1966 Universal Studios ghoulish comedy farce.

1966 Universal Studios theatrical trailer for “The Ghost and Mr. Chicken.”

1966 Universal Studios poster art for “The Ghost and Mr. Chicken.”

The players who appeared in “The Ghost and Mr. Chicken” were Don Knotts (as Luther Heggs), Joan Staley (as Alma Parker), Liam Redmond (as Kelsey), Dick Sargent (as George Beckett), Skip Homeier (as Ollie Weaver), Reta Shaw (as Mrs. Halcyon Maxwell), Philip Ober (as Nicholas Simmons), Hal Smith (in an uncredited role as Calver Weems) and Dick Wilson (in an uncredited role as a bandmaster).