“Svengoolie” to present his big broadcast showcase of “Frankenstein” (1931), this Sat. on Me-TV

Fellow Svengoolie SvenPals from coast-to-coast will be jumping for joy for his big broadcast showcase of a classic Universal Studios monster masterpiece. 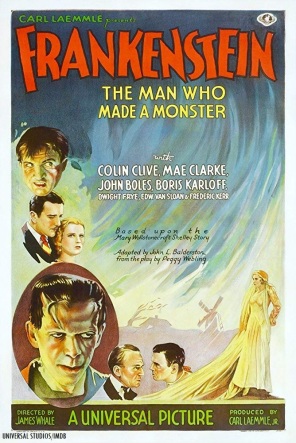 The legendary Berwyn/Chicago-based monster film host will present his big broadcast showcase of “Frankenstein” (1931), this Sat., May 4 at 8 p.m. Eastern/7 p.m. Central on Me-TV (as part of Sven’s “Monstrous May” festival of classic Universal “Frankenstein” monster features).

To quote Universal’s ending motto, “A good cast is worth repeating.”  Who was in Whale’s Universal production of “Frankenstein” (1931)?

END_OF_DOCUMENT_TOKEN_TO_BE_REPLACED

“Svengoolie” to present his big broadcast showcase of “The Blob” (1958), this Sat. on Me-TV

Fellow Svengoolie SvenPals from coast-to-coast will be excited for his big broadcast showcase of a classic sci-fi/horror masterpiece.

“Svengoolie” presents his big broadcast showcase of “The Blob” (1958)

Original animated opening title sequence to “The Blob” (1958), featuring the famous title theme song written and composed by Burt Bacharach and Mack David; with vocalizations by Bernie Knee (under the name of “The Five Blobs“).

The legendary Berwyn/Chicago-based sci-fi/thriller film host will present his big broadcast showcase of “The Blob” (1958), this Sat., April 27 at 8 p.m. Eastern/9 p.m. Central on Me-TV.

Originally released theatrically  by Paramount Pictures in 1958, “The Blob” was directed by Irvin S. Yeaworth Jr. and was produced by Jack H. Harris under the banner of “Tonylyn Productions;” according to information from IMDB.  Harris and the junior Yeaworth would later work on “4D Man” (1958, with Robert Lansing, Lee Meriwether and Patty Duke) and “Dinosaurus!” (1960, with Ward Ramsey, Kristina Hanson and Paul Lukather; the two latter Harris-Yeaworth productions were originally released to theaters throughout the United States by Universal Studios).

This will mark Sven’s second big coast-to-coast broadcast of “The Blob” (1958) on Me-TV.  He previously showcased the 1958 Harris-Yeaworth sci-fi/thriller classic back in May 2018.  Sven also previously showcased the film on his hometown station in Berwyn/Chicago, WCIU-TV 26 “The U” back in March 2009; according to IMDB.  Fellow super SvenPal David Fuentes and his official “Terror From Beyond the Dave” YouTube site has segments from Sven’s past WCIU-TV/”The U” Berwyn/Chicago telecast of “The Blob” (1958).

The players who appeared in the 1958 Harris-Yeaworth sci-fi/thriller classic were young Steve McQueen (credited as “Steven McQueen” in the role of Steven Andrews, McQueen also appeared in the role of Josh Randall in the 1958-61 CBS/Four Star TV western, “Wanted: Dead or Alive;” both “The Blob” and “Wanted: Dead or Alive” would help ensure greater success for McQueen’s screen career), Aneta Corsaut (as Jane Martin, Corsaut was credited under the name of “Aneta Corseaut” in the film, Corsaut went on to greater fame in the role of Helen Crump on “The Andy Griffith Show” from 1963-68), Earl Rowe (as Lt. Dave), Lee Payton (as Nurse Kate),  Stephen “Steven” Chase as Dr. T. Hallen, Olin Howland (as an elderly man, Howland was credited as “Olin Howlin;” this was one of Howland/Howlin’s final film appearances, according to the American Film Institute), George Karas (as Officer Ritchie, Karas later appeared in the 1959 Harris-Yeaworth production of  “4D Man” in the role of Sgt. Todaman), John Benson (as Sgt. Jim Bert), Elbert Smith (as Henry Martin), Audrey Metcalf (as Elizabeth Martin) Hugh Graham (as Mr. Andrews) and Vince Barbi (as café/diner owner George).

END_OF_DOCUMENT_TOKEN_TO_BE_REPLACED

“Svengoolie” to present his big broadcast premiere of “Valley of the Dragons” (1961), this Sat. on Me-TV

Fellow Svengoolie SvenPals everywhere will be excited for his big broadcast premiere of a classic Columbia Pictures sci-fi/fantasy creature feature.

Original 1961 Columbia Pictures poster artwork for “Valley of the Dragons.”

The legendary Berwyn/Chicago-based sci-fi/fantasy film host will present his big broadcast premiere of “Valley of the Dragons” (1961), this Sat., April 20 at 8 p.m. Eastern/7 p.m. Central on Me-TV.

The 1961 sci-fi/fantasy creature feature was directed by Columbia veteran Edward Bernds.  Bernds started out as a sound engineer for the studio, notably for his work on Frank Capra’s acclaimed Columbia features; including “It Happened One Night” (1934, with Clark Gable and Claudette Colbert), “Mr. Deeds Goes to Town” (1936, with Gary Cooper and Jean Arthur) and “Mr. Smith Goes to Washington” (1939, with James Stewart, Arthur and Claude Rains).

Some of Bernds’ non-Columbia features that he directed were “Queen of Outer Space” (1958, for Allied Artists) with Zsa Zsa Gabor and the Twentieth Century Fox sequel to 1958’s “The Fly,” “Return of the Fly” (1959) with Vincent Price.

According to Clive Hirschorn’s retrospective book on Columbia Pictures, “The Columbia Story;” Bernds also wrote the screenplay for “Valley of the Dragons,” which was adapted from Donald Zimbalist ‘s story treatment.  Bernds and Zimbalist’s work was loosely inspired by Jules Verne’s novel, “Career of a Comet” (a.k.a., “Off on a Comet” and “Hector Servadac”).

The players who appeared in Bernds’ 1961 Columbia sci-fi/fantasy creature feature were Cesare Danova (as Hector Servadac), Sean McClory (as Michael Denning), Joan Staley (as Deena), Danielle De Metz (as Nateeta), Gregg Martell (as Od-Loo), Gil Perkins (in the dual roles of Tarn and a Doctor), I. Stanford Jolley (as Patoo), Mike Lane (as Anoka), Roger Til (as Vidal), Mark Dempsey (as Andrews), Jerry Sunshine (as LeClerc) and Dolly Grey (as Mara).

END_OF_DOCUMENT_TOKEN_TO_BE_REPLACED

Fellow vintage cinema aficionados in the Frederick area will be interested in a classic British mystery-thriller feature from the “master of suspense.”

“The Lady Vanishes” (1938) was directed by Alfred Hitchcock.  Hitchcock’s 1938 mystery-thriller was based off of Ethel Lina White’s story, “The Wheel Spins.”  The screenplay for Hitchcock’s “The Lady Vanishes” was written by Sidney Gilliat (who was credited in the film under the name of “Sidney Gilliatt”).  Hitchcock’s 1938 feature was produced by Gaumont-British and their Gainsborough Pictures unit (Gaumont-British was once connected to pioneering French film studio Gaumont) and was released theatrically in Great Britain by Metro-Goldwyn-Mayer, according to IMDB.

The players who appeared in Hitchcock’s 1938 mystery-thriller were Margaret Lockwood (as Iris Henderson), Michael Redgrave (as Gilbert), Dame May Whitty (as Miss Froy), Paul Lukas (as Dr. Hartz), Cecil Parker (as Mr. Tod Hunter), Linden Travers (as Mrs. Todhunter), Naunton Wayne (as Caldicott), Basil Radford (as Charters), Mary Clare (as the Baroness), Googie Withers (as Blanche), Catherine Lacey (as a Nun), Charles Oliver (as an officer) and an uncredited cameo appearance by Alfred Hitchcock (for those who have never seen “The Lady Vanishes,” Hitchcock’s cameo role will not be revealed in this post).

END_OF_DOCUMENT_TOKEN_TO_BE_REPLACED

Leaflet for Turner Classic Movies, which was included with most classic Warner Bros. DVD releases many years ago (including pre-1948 WB and post-1948 WB classic features, along with Turner Entertainment’s holdings of classic RKO features and classic pre-1986 Metro-Goldwyn-Mayer features).

The writer of “Silver Screen Reflections” commemorates Turner Classic Movies and the network’s 25th anniversary!  Happy 25th and here’s to many more years of classic features, cult features and rarely-seen classics on the network!  -C.H.

“A ‘new age’ in modern movie viewing!” 1969 grand opening advertisement for the now-defunct Holiday Cinema(s) from The Frederick News (News-Post); featuring a mention of the theater’s screening of “Funny Girl” (1968) and the “Rocker-Lounger” theatrical seating chair.

Sidebar: This was written in connection to the recent closure of Frederick’s second-run Holiday Cinemas twinplex, according to the April 10 edition of the Frederick News-Post.  Long before the Loudin organization (MDL Entertainment) managed and owned the Holiday, the theater originally opened as a first-run theater complex on Oct. 23, 1969, according to CinemaTreasures.

A more detailed post on the history of Frederick’s Holiday cineplex (written for the 45th anniversary of the theater in 2014) can be found on my previous cinema-oriented blog, “At the Matinee.” -C.H.

Looking back at a vintage pre-grand opening advertisement from the Oct. 22, 1969* edition of The News (News-Post) for the pre-twinplex Holiday Cinema (in Frederick, Maryland) with their opening night (Oct. 23, 1969) screening of the 1968 William Wyler–Ray Stark–Columbia musical biopic of Fanny Brice with Barbra Streisand and Omar Sharif, “Funny Girl;” there was also a new innovation that was mentioned in the advertisement.

According to the ad for the Holiday’s then-upcoming grand opening event, management boasted that the theater had the “first Western Maryland installation of the ‘Rocker-Lounger,’ an over-sized, permanently-mounted rocking chair!”

END_OF_DOCUMENT_TOKEN_TO_BE_REPLACED

RiffTrax Live: “Octaman” to be shown in select theaters from coast-to-coast on April 18 (with a pre-recorded encore on April 24)

Fellow “RiffTrax” fans and “Mystery Science Theater 3000” MSTies will be interested in a live movie-riffing event of a cult creature feature from coast-to-coast. 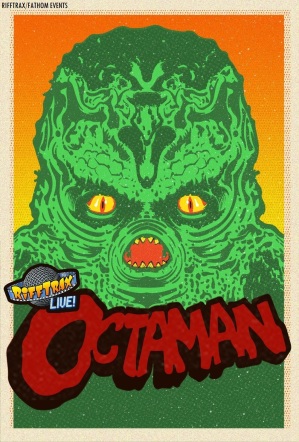 Artwork for the upcoming “RiffTrax Live!” edition of “Octaman” (1971).

RiffTrax, in conjunction with Fathom Events will be presenting “RiffTrax Live: Octaman” in participating theaters from coast-to-coast with a live theatrical telecast on Thurs., April 18 at 8 p.m. Eastern/7 p.m. Central (local time, according to Fathom Events’ site).  A pre-recorded encore will occur in participating cinema venues from coast-to-coast on Wed., April 24 at 7:30 p.m. (all times local, according to Fathom).

The RiffTrax crew will be riffing the cult creature feature, “Octaman” (1971).  “Octaman” was directed and written by Harry Essex.  Essex was known for writing the screenplay for Jack Arnold’s Universal sci-fi classic, “It Came from Outer Space” (1953) and Arnold’s Universal monster creature classic, “Creature from the Black Lagoon” (1954).

The players who appeared in Essex’s 1971 creature feature entry were Pier Angeli (as Susan Lowry), Jeff Morrow (as Dr. John Willard, Morrow previously appeared in Joseph Newman’s 1955 Universal sci-fi classic; “This Island Earth” in the role of Exeter), Kerwin Matthews (as Dr. Rick Torres, Matthews previously appeared in the title role of Captain Sinbad in the 1958 Ray Harryhausen–Charles H. Schneer–Columbia classic, “The 7th Voyage of Sinbad”), Read Morgan (as the “Octaman”), Jerome Guardino (as Johnny Caruso), David Essex (as an Indian, David Essex is the real-life son of Harry Essex), Robert Warner (as Steve), Buck Kartalian (as Raul).  According to Fathom Events’ official site, the creature make-up effects for the “Octaman” creature were created by a young Rick Baker; who went onto greater fame for his work in the fields of make-up and creature effects in modern cinema.