Fellow Svengoolie SvenPals will be looking forward to his upcoming end-of-the-year presentation of a 1940 Paramount Pictures Technicolor science fiction thriller.

“Dr. Cyclops” was directed by Ernest B. Schoedsack.  Merian C. Cooper served as one of the co-producers of the film with Dale Van Every (Cooper did not receive screen credit for the 1940 Technicolor sci-fi fantasy-thriller).  Both Cooper and Schoedsack were known for their wildly successful 1933 monster hit for RKO Radio Pictures,  “King Kong.”

Paul Fix would later go on to greater fame for his role of Marshal Micah Torrance in the hit 1958-63 television western, “The Rifleman” (with Chuck Connors).

END_OF_DOCUMENT_TOKEN_TO_BE_REPLACED

Season’s Greetings to all from “Silver Screen Reflections”

Fellow Svengoolie SvenPals from coast-to-coast will be excited about his upcoming showcase of a 1940 Universal Studios feature with comedy, romance and science fiction!

Universal Studios theatrical trailer for “The Invisible Woman” (1940). The copy that you are seeing here was altered for a late-1950s package of pre-1948 Universal features that was leased for television distribution via Screen Gems (subsidiary of rival studio Columbia Pictures).

MCA/Universal would re-acquire the television rights to the pre-1948 Universal films in later years. 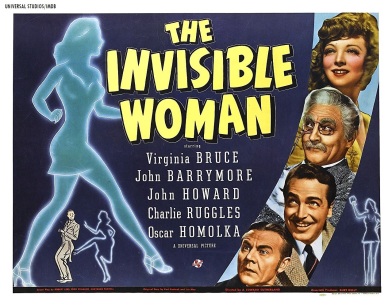 “The Invisible Woman” was directed by A. Edward Sutherland.  He also worked on Universal’s “One Night in the Tropics” (1940), which was the first feature film for Bud Abbott and Lou Costello.

Who was in “The Invisible Woman?”

END_OF_DOCUMENT_TOKEN_TO_BE_REPLACED

Fellow Svengoolie SvenPals will be jumping for joy this Sat. as he will showcase a 1934 horror-adventure classic featuring two Universal Studios horror icons.

Since the original theatrical trailer is unavailable, here is a fan-made trailer of Universal’s 1934  screen adaptation of “The Black Cat” from Ray Faiola/Chelsea Rialto Studios.

“The Black Cat” was directed by Edgar G. Ulmer.  Ulmer later worked on “The Man from Planet X” (1951) and “The Naked Dawn” (1955).  The screenplay for Ulmer’s 1934 feature was written by Peter Ruric and was based off of Edgar Allan Poe’s story.

The players who appeared in the 1934 Universal screen adaptation of “The Black Cat” were Boris Karloff (as Hjalmar Poelzig), Bela Lugosi (as Dr. Vitus Werdegast), David Manners (as Peter Alison), Julie Bishop (as Joan Alison, Bishop was credited under the name of Jacqueline Wells in the film), Egon Brecher (as the Majordomo), Harry Cording (as Thamal), Lucille Lund (as Karen), Henry Armetta (as a sergeant), Albert Conti (as a lieutenant) and John Carradine (in a non-credited role as the cult organist).

END_OF_DOCUMENT_TOKEN_TO_BE_REPLACED

UPDATE (Dec. 10): A typographical/WordPress formatting error was made in the lead of this recent blog post (the prize of the “Batman in Noir Alley” comic was retrieved on Dec. 4, not Nov. 27).  The lead has been corrected. -C.H.

On Dec. 4, I received a surprise package from Turner Classic Movies as part of a recent “Backlot” prize giveaway! 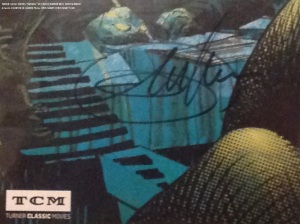 The prize was a copy of the recent “Batman in Noir Alley” comic, which was autographed by TCM’s Sun. morning “Noir Alley” host and film noir historian/expert Eddie Muller!  Valentine De Landro designed the cover for the special edition “Batman” comic, Dan Panosian did the artwork and Stuart Moore wrote the story.

40 issues of the DC Comics-TCM “Batman”/”Noir Alley” comic were given away to TCM Backlot members who entered in the contest (I recently became a “Backlot” member as part of a graduation gift from my parents)!

Thank you to Turner Classic Movies, DC Comics, Mr. Eddie Muller (for the autographed “Batman in Noir Alley” comic) and to my parents (for the wonderful “Backlot” gift as a graduation gift during the summer)!  And kudos to all classic cinema/film noir and comic aficionados everywhere!  Highly appreciated, citizens!  -C.H.

My graduation present (the complimentary Turner Classic Movies T-shirt) that came with my TCM Backlot membership! Thanks, Mom and Dad (highly appreciated, from Summer 2017)!

Fellow Svengoolie SvenPals and Universal Studios horror film aficionados will be interested in an upcoming broadcast of a 1944 monster franchise feature.