Fellow Svengoolie SvenPals everywhere will be jumping for joy with his big 2020 broadcast of a classic Universal Studios sci-fi masterpiece.

Original 1953 Universal Studios introductory theatrical trailer for “It Came From Outer Space,” featuring an introduction by Richard Carlson discussing the 3-D process for the feature. 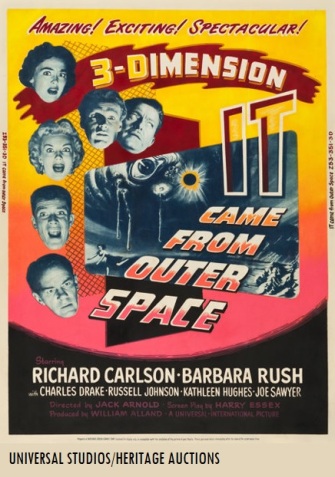 The legendary Berwyn/Chicago-based sci-fi/creature film host will present his big broadcast of “It Came From Outer Space” (1953), this Sat.; Jan. 4 at 8 p.m. Eastern/7 p.m. Central on Me-TV.

This will mark Sven’s fourth big broadcast of Jack Arnold’s 1953 Universal classic sci-fi masterpiece on Me-TV.  Sven previously showcased “It Came From Outer Space” back in May 2014, Oct. 2015 and Sept. 2017.

Who was in Jack Arnold’s Universal production of “It Came from Outer Space” (1953)?

The 1953 Jack Arnold-Universal production of “It Came From Outer Space” marked Ray Bradbury’s first screen treatment piece, according to additional details from Jeff Stafford’s article for TCM.  According to the 2000/2002 Universal supplemental DVD retrospective documentary featurette on “It Came From Outer Space,” “The Universe According to Universal;” both Bradbury and Arnold envisioned a sci-fi feature with elements from the “point-of-view” of the alien creature. 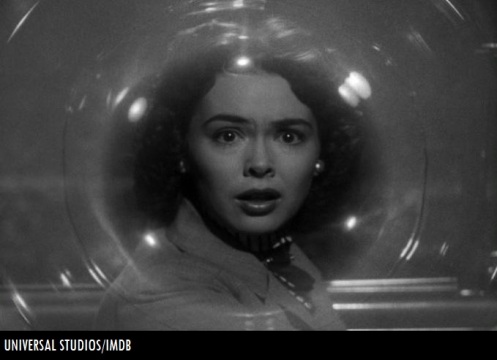 “Point of view” perspective from the Xenomorph alien looking at Barbra Rush (as Ellen Fields) in Jack Arnold‘s Universal production of “It Came From Outer Space” (1953).

According to IMDB, the “point-of-view” Xenomorph alien creature perspective shot effect in Jack Arnold’s Universal production of “It Came From Outer Space” was perfected with a customized “tough bubble” on the camera lens.  The “point-of-view” scenes were brief due to the limitations of the tough bubble.

The fictional town of “Sand Rock, Arizona” for “It Came From Outer Space” 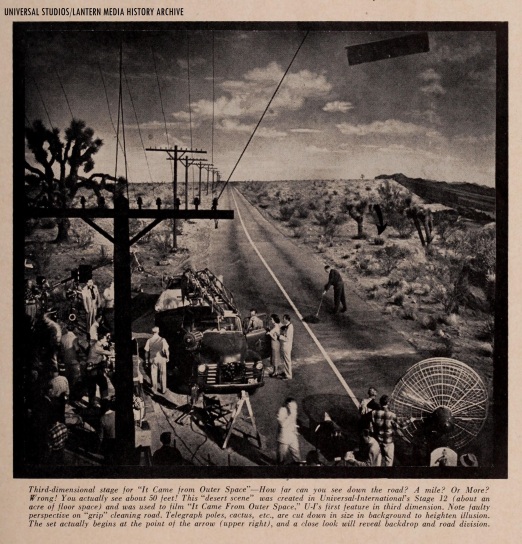 A “mock” desert setting for the fictional town of Sand Rock, Arizona for Jack Arnold‘s production of “It Came From Outer Space” (1953) on stage 12 at Universal Studios in Hollywood, California.

According to additional information from Jeff Stafford’s TCM online article on Arnold’s 1953 Universal sci-fi production, “It Came From Outer Space” was set in the fictional location of Sand Rock, Arizona.  Outdoor scenes were filmed in the towns of of Victorville, Palmdale and Apple Valley, California for the fictional location of Sand Rock, according to the American Film Institute.  A mock “Sand Rock” desert setting for Arnold’s sci-fi production was also constructed on stage 12 at Universal Studios in Hollywood, according to Leonard Clairmont’s 1953 article on the mock “Sand Desert” set in Home Movies.

“It Came From Outer Space:” A Universal feature of many firsts

Jack Arnold’s 1953 production of “It Came From Outer Space” marked Universal’s first 3-D feature film production, according additional details from the AFI article.  During the original theatrical release, this also marked the first combination of the polarized 3-D process combined with widescreen projection and stereophonic sound; along with the first 3-D musical short subject filmed by Universal of legendary singer Nat “King” Cole with Russ Morgan’s orchestra, according to a 1953 studio exhibitors’ ad.

In 2016, Arnold’s 1953 classic sci-fi masterpiece was restored by Universal in conjunction with veteran film preservationists Bob Furmanek, Thad Komorowski and the 3-D Film Archive.  “It Came From Outer Space” was restored for the studio’s 3-D Blu-Ray disc release with the original polarized 3-D film elements for high-definition 3-D sets with a 3-D Blu-Ray player.  According to Greg Kintz’s 3-D Film Archive article, the surviving theatrical magnetic stereophonic audio track for Jack Arnold’s Universal production of “It Came From Outer Space” was also restored for the 3-D Blu-Ray edition. 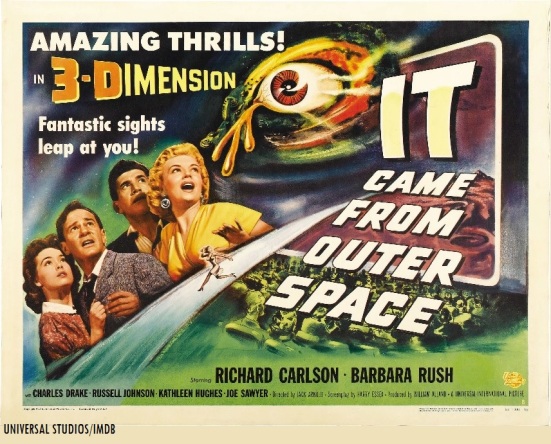 Ring in the New Year with Sven and Kerwyn! Svengoolie (portrayed by Rich Koz),, Kerwyn & all fellow super SvenPals are ready for his big 2020 broadcast of “It Came From Outer Space” (1953), this Sat. on Me-TV!

With Richard Carlson, Barbara Rush, Russell Johnson, Charles Drake, Kathleen Hughes, Joseph Sawyer, Alan Dexter and the source orchestral music score of Irving Gertz, Herman Stein and young Henry Mancini; you will not want to miss out on Svengoolie’s first big broadcast feature of 2020, “It Came From Outer Space” (1953) this Sat. on Me-TV!  Ring in the New Year with Sven’s extended fun facts, Doug Graves’ parody tune of the evening and Kerwyn’s “mail call” segment!  Highly recommended to all fellow super SvenPals and aficionados of classic sci-fi features everywhere! You will not be disappointed!

Happy New Year/Happy 2020 to the entire crowd of fellow Svengoolie SvenPals and fellow readers of “Silver Screen Reflections” from the author/writer of “Silver Screen Reflections!”  Here’s to many more Sven Sat. night big broadcast classics with all my fellow SvenPals everywhere in 2020 and beyond!  And Happy New Year/Happy 2020 to Svengoolie/Mr. Rich Koz, Doug Graves/Doug Scharf, Kerwyn, Tombstone and the entire Sven/Me-TV production team!  Keep the excellent and wonderful work, Sven!  Looking forward to more big broadcast Berwyn adventures/classic monster/horror/sci-fi masterpieces in 2020 and beyond! -C.H.

Live-tweet with all fellow super #Svengoolie SvenPals (via Twitter) from coast-to-coast during Sven’s first big Me-TV broadcast of 2020 with “It Came From Outer Space” (1953)!

Svengoolie will be returning to the Chicago Comic and Entertainment Expo (C2E2) event for an upcoming appearance in Feb. 2020!  According to Sven’s official Twitter site and the official Twitter site of C2E2, Svengoolie will be making an appearance at the 2020 Chicago Comic and Entertainment Exposition (C2E2) on Sat., Feb. 29 at 12:30 p.m. (local time) in room S504 (at the South Building at McCormick Place; 2301 S. Lake Shore Drive, Chicago, Illinois 60601)!  Additional ticket information is available on the official C2E2 site. Again, stay tuned for additional information from Sven’s official social media sites, the social media site of C2E2 and the weekly “Silver Screen Reflections”blog in case of any updates of Sven’s C2E2 appearance. –C.H.

Sven/Mr. Rich Koz’s upcoming May 2020 appearance for the 50th anniversary of Chicago’s classic radio program, “Those Were the Days!” Time is running out to purchase Early bird tickets for the upcoming May 2, 2020 WDCB “Those Were the Days” 50th anniversary big Chicago vintage radio broadcast celebration with appearances by Sven’s alter-ego, Mr. Rich Koz; current “Those Were the Days” host and “Nostalgia Digest” publisher Steve Darnall, original “Those Were The Days” host Chuck Schaden, Trace Beaulieu of MST3K and “The Mads!” fame, Kevin Murphy of MST3K and “RiffTrax” fame, actress Patty McCormack of  “The Bad Seed”  fame; “Those Were the Days” announcer Ken Alexander, actor/writer Scott Lowell of Binge Networks’ “Adoptable” fame, Tim Kazurinsky of “Saturday Night Live” fame (1981-85) and live music by the Dooley Brothers and the West End Jazz Band! Discount early bird tickets can be still purchased through WDCB’s official website and/or the official Eventbrite platform!  Purchase your “early bird” tickets today before time runs out (again, the final day for the “Early Bird” online ticket offer is on New Year’s Eve/Dec. 31, 2019)!  Note: Ticket prices range from $45-$50.  The 50th anniversary celebration event of “Those Were the Days” will occur on Sat., May 2, 2020 at the Irish American Heritage Center (4626 N. Knox Ave, Chicago, Illinois 60630) from 1 p.m.-5 p.m. (local time)!

And to the entire crowd of fellow super SvenPals of Berwyn/Chicago, Illinois and beyond who are attending Sven’s upcoming appearance at the C2E2 2020 event  and 50th  celebration big broadcast of “Those Were the Days” on May 2, 2020; have fun seeing Sven/Mr. Rich Koz in-person at C2E2 in Feb. and Sven/Mr. Rich Koz, Trace Beaulieu, Kevin Murphy, Steve Darnall, Chuck Schaden, Patty McCormack, Ken Alexander, Scott Lowell, Tim Kazurinsky. the West End Jazz Band and the Dooleys in May! –C.H.

Three cheers, two thumbs up & congrats to David on meeting Sven/Sventa in-person during his Dec. Lyons “Christmas Mystic Market Appearance” from the entire crowd of fellow super Svengoolie SvenPals everywhere!  Here’s to many more “Terror From Beyond the Dave” adventures in 2020 and beyond!  We’re all proud of you! Keep up the excellent and wonderful work, David!  Kudos, peace & “Hi-Keeba” from all of us! –C.H.

Extra! Extra! Extra! Fellow super Svengoolie SvenPal Jamie Lee will be ringing in the New Year with her Sat. morning big broadcast cavalcade radio show on the airlanes of Northwestern University Radio/WNUR this Sat., Jan . 4; “Jammin’ with Jamie!”  Jam along with Jamie’s first 2020 “Jammin’ with Jamie” big broadcast jam session cavalcade this Sat., Jan. 4 at 6 a.m. Central/7 a.m. Eastern on the airlanes of WNUR-FM 89.3 in the greater Evanston/Berwyn/Chicago listening area, from coast-to-coast, around the world and throughout the galaxy on WNUR.org and on the TuneIn platform!  If you have a favorite New Year’s song request for Jamie’s portfolio of jams for the New Year for her upcoming big broadcast jam session cavalcade/serenade for Sat., Jan. 4; be sure to send in your song request/nomination to Jamie’s official Twitter site or Jamie’s official website before this Sat.!

Three cheers & two thumbs up & congrats to Jamie on your upcoming “Jammin’ with Jamie” big broadcast jam session from the entire crowd of fellow super jammers and super Svengoolie SvenPals everywhere!  Here’s to many more “Jammin’ with Jamie” big broadcast jam session cavalcades on the airlanes of WNUR.org in 2020 and beyond!  We’re all proud of you!  Keep up the wonderful and excellent work, Jamie!  Kudos, peace & “Hi-Keeba” from all of us fellow super jammers & fellow super SvenPals everywhere! –C.H.

Also be sure to donate generously/spread the word to help one of Jamie’s friends from the PM&L players through her friend’s official “GoFundMe” website (to help offset costly health costs)!  –C.H.

“It Came From Outer Space” (1953, containing both 3-D* and 2-D versions) is available on Blu-Ray disc and DVD (2-D) disc from Universal.  The film is also available for streaming from Universal through participating online/video-on-demand service providers.

*Must have a 3-D Blu-Ray player and 3-D HDTV set/display to watch the 3-D edition of “It  Came From Outer Space.”

Questions/comments about “Svengoolie” and/or his big 2020 broadcast of “It Came From Outer Space” (1953)? Drop a line in the comments section!

Note: The author of “Silver Screen Reflections” does not endorse any advertisers on WordPress’ site platform and/or YouTube’s site platform.