Fellow Svengoolie SvenPals will be jumping for joy from coast-to-coast for his big broadcast of a classic Columbia Pictures/Hammer Studios monster-horror masterpiece.

“Svengoolie” presents his big broadcast of “The Gorgon” (1964)

The legendary Berwyn/Chicago-based horror/monster film host will present his big broadcast of “The Gorgon” (1964), this Sat., Nov. 16 at 8 p.m. Eastern/7 p.m. Central on Me-TV.

Fisher’s 1964 Columbia/Hammer production  was released theatrically as a double-feature presentation in the United States with Michael Carreras’ Columbia/Hammer “Mummy” entry, “The Curse of the Mummy’s Tomb” (1964, with Terence Morgan, Dickie Owen, Jeanne Roland and Fred Clark); according to an original 1964 Columbia Pictures exhibitors’ trade advertisement.

Prudence Hyman was not the first choice for “The Gorgon” 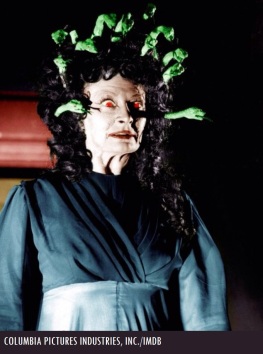 Close-up of Prudence Hyman as the title character of the “Gorgon” in Terence Fisher’s Columbia/Hammer production of “The Gorgon” (1964).

According to additional information from IMDB, Barbara Shelley originally requested to play the title character of the “Gorgon” in Fisher’s 1964 Columbia-Hammer production.  Shelley suggested to Anthony Nelson Keys for her original “Gorgon” idea that her “medusa”-style wig to be fitted with actual live garden snakes.  Keys was not fond of Shelley’s “live snake wig” plan. Prudence Hyman was then chosen for the title role of the “Gorgon” with a faux snake wig.

According to Jeff Stafford’s article on “The Gorgon” for Turner Classic Movies’ website, Keys originally considered two actresses to play the role of the “Gorgon’ in order to protect the secrecy of the title “Gorgon” character creation. 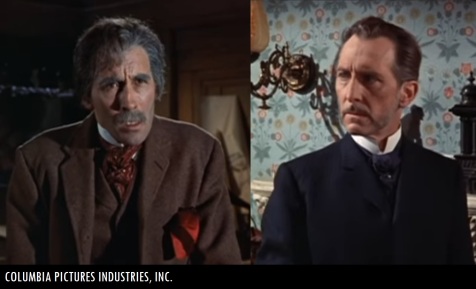 Christopher Lee as Prof. Karl Meister and Peter Cushing as Dr. Namaroff in Terence Fisher’s Columbia/Hammer production of “The Gorgon” (1964).

“The Gorgon” was considered as a “comeback” film for Fisher due to the unsuccessful box office returns of his Universal-Hammer adaptation of “The Phantom of the Opera” (1962, with a pre-“Pink Panther” Herbert Lom), according to additional information from Jeff Stafford’s TCM online article.

Fisher’s 1964 Columbia-Hammer production of “The Gorgon” marked a change for both Christopher Lee and Peter Cushing’s traditional Hammer feature roles.  In their previous Hammer horror appearances, Lee was usually cast as the villain and Cushing was usually cast as the hero; according to additional details from Jeff Stafford’s TCM article.  For “The Gorgon,” Lee’s role of Prof. Karl Meister was dubbed as the “hero,” while Cushing’s role of Dr. Namaroff was dubbed as the “villain.”

Be sure to watch/record Svengoolie’s big broadcast of “The Gorgon” (1964), this Sat. on Me-TV!

Legends of Berwyn’s airlanes and beyond! Svengoolie (portrayed by Rich Koz), Kerwyn & all fellow super SvenPals are ready for his big broadcast of “The Gorgon” (1964) with Christopher Lee, Peter Cushing, Barbara Shelley and a pre-“Doctor Who” Patrick Troughton, this Sat. on Me-TV!

With Christopher Lee, Peter Cushing, Prudence Hyman, a pre-“Doctor Who” Patrick Troughton, Barbara Shelley, Alister Williamson, Michael Goodliffe, Richard Pasco, Joseph O’Conor, Jack Watson, Redmond Phillips and Michael Peake; you will not want to miss out on Svengoolie’s big broadcast of “The Gorgon” (1964), this Sat. on Me-TV!  One of many perfect Hammer horror treats for the entire crowd of fellow super SvenPals  from coast-to-coast with Sven’s extended fun facts, Doug Graves’ parody tune and Kerwyn’s “mail call” segment! You will not be disappointed!  Highly recommended to all fellow super SvenPals & aficionados of Hammer horror features everywhere!

*Sven’s hometown station in Berwyn/Chicago, WCIU-TV’s “The U” moved to WCIU-TV 26.2 since WCIU’s main channel; WCIU-TV 26.1 recently became the Chicago home of The CW (CBS-Warner Bros.) network, according to the WCIU’s official website. –C.H.

Svengoolie presents his big broadcast of “The Gorgon” (1964)

Live-tweet with all fellow coast-to-coast super SvenPals everywhere via Twitter this Sat. during #Svengoolie’s big Me-TV broadcast of “The Gorgon” (1964)!

According to Steve Darnall (of “Nostalgia Digest” fame and host of WDCB-FM’s “Those Were the Days” Chicago-based classic old-time radio show broadcast) and his official Twitter site, Svengoolie’s alter-ego; Mr. Rich Koz will be making an appearance for the upcoming 50th anniversary big broadcast of “Those Were the Days!”

According to Darnall’s Nostalgia Digest site, additional personalities will also be on hand in addition to Sven/Mr. Rich Koz for the 50th anniversary of “Those Were the Days;” including “Mystery Science Theater 3000” MST3K alums Trace Beaulieu (currently of “The Mads!” fame) and Kevin Murphy (currently of “RiffTrax” fame); original founding host of “Those Were the Days” Chuck Schaden, “Those Were the Days” announcer Ken Alexander, film/TV players Patty McCormack, Scott Lowell, writer Tim Kazurinsky and live music by the Dooley Brothers and the West End Jazz Band! The 50th anniversary “Those Were the Days” event will occur on Sat., May 2, 2020 at the Irish American Heritage Center (4626 N. Knox Ave, Chicago, Illinois 60630) from 1 p.m.-5 p.m. (local time)!  “Early Bird” tickets are now available (through the Eventbrite online ticketing platform).

To all fellow super SvenPals of Berwyn/Chicago, Illinois and beyond who are attending the May 2020 50th big broadcast anniversary of “Those Were the Days,” have fun seeing Sven/Mr. Rich Koz, Trace Beaulieu, Kevin Murphy, Steve Darnall, Chuck Schaden, Patty McCormack, Ken Alexander, Scott Lowell, Tim Kazurinsky the West End Jazz Band and the Dooleys in person! –C.H.

Extra! Extra! Extra! Installment #3 of “Svengoolie Meets the DC Universe” will be available in most issues of DC Comics’ superhero publications beginning this Wed., Nov. 13 at your favorite comic book store, bookseller and/or supermarket!

Extra! Extra! Extra!  Fellow super Svengoolie SvenPal Jamie Lee will be having a sci-fi edition of her Sat. morning Northwestern University Radio/WNUR big broadcast jam session radio show, “Jammin’ with Jamie!”  Jamie’s big broadcast sci-fi jam session cavalcade will air this Sat. morning, Nov. 16 at 6 a.m. Central/7 a.m. Eastern on the airlanes of Northwestern University Radio/WNUR-FM 89.3 in the greater Evanston/Berwyn/Chicago, Illinois listening area and simulcasting from coast-to-coast and around the globe on the airlanes of WNUR.org!

If you have any requests/suggestions of science fiction/sci-fi or Sven sci-fi tunes for Jamie’s portfolio of sci-fi jams for her Sat. morning big “Jammin’ with Jamie” broadcast jam session cavalcade, be sure to send in your to sci-fi song requests to Jamie’s official Twitter site and/or Jamie’s official website before her Sat. morning (Nov. 16) big broadcast jam session cavalcade!

I wrote a full article about #JamminWithJamie’s 200th show, summing it up and compiling all the videos from the show and bonus content! @WNUR893 @HarmonyRanch @grifdean @chrishambyfilms @Svengoolie #Svengoolie #Radio https://t.co/SAC5BBCwXT

Also be sure to donate generously /spread the word to help one of Jamie’s friends from the PM&L players through her friend’s official “GoFundMe” websitesite (to help offset expensive health costs)!  Any amount helps! –C.H.

“Monsters are selling better than ever!” Original 1964 Columbia Pictures exhibitors’ ad for the studio’s double-feature Hammer presentation of “The Gorgon” and “The Curse of the Mummy’s Tomb;” with the “monster stamps” promotional tie-in.

Questions/comments about “Svengoolie” and/or his big broadcast of “The Gorgon” (1964)?  Drop a line in the comments section!

Note: The author of “Silver Screen Reflections” does not endorse any advertisers on WordPress’ site platform.