Happy Thanksgiving from the author of “Silver Screen Reflections!”

“Svengoolie”/portrayed by Rich Koz, Weigel Broadcasting Co./WCIU-TV/Me-TV  (from the official YouTube site of David Fuentes, one of many fellow super SvenPals)

Happy Thanksgiving/Turkey Day to all fellow Svengoolie SvenPals, MSTies of “Mystery Science Theater 3000” and all fellow classic/cult motion picture and TV aficionados everywhere from the author of “Silver Screen Reflections!”

Whether you watched the parade earlier today or watching your favorite classic film or TV series, watching classic MST3K on Shout! Factory TV’s platform, the Netflix rendition of “Mystery Science Theater 3000” (and today’s season 12 premiere of “MST3K: The Gauntlet”), the Pee-Wee Herman (“Pee Wee’s Playhouse”) Thanksgiving marathon over on IFC, the “Turkeys Away” episode of “WKRP in Cincinnati” this evening on Me-TV or gearing up for Svengoolie’s big broadcast of William Castle’s “Mr. Sardonicus” (1961) this Sat. on Me-TV; we hope you’re all having a happy Thanksgiving!

Fellow MSTies of “Mystery Science Theater 3000” everywhere will jump for joy for pre-Thanksgiving and post-Thanksgiving treats in honor of the 30th anniversary of MST3K!

END_OF_DOCUMENT_TOKEN_TO_BE_REPLACED

“Mystery Science Theater 3000 Live: ‘Watch out for Snakes!’ Tour” is coming to select cities throughout the nation (July 6-Aug. 12)!

With the recent return of “Mystery Science Theater 3000” on Netflix, fellow MSTies will be excited about an upcoming nationwide MST3K live movie riffing showcase.

END_OF_DOCUMENT_TOKEN_TO_BE_REPLACED

New MST3K will premiere on Netflix

As 2016 has been a big year for fellow MSTies, the reboot of the series will be launched on a popular video streaming service.

The return of “Mystery Science Theater 3000” on Netflix 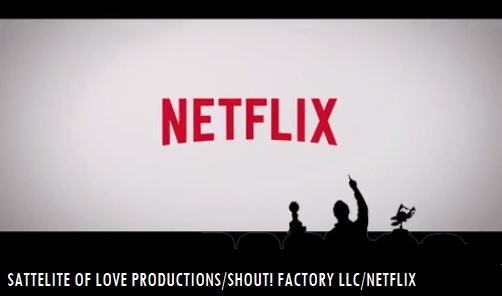 Screengrab of animated GIF (from the official MST3K Twitter site).

According to the official MST3K Twitter and Facebook sites (and by word of mouth from one of many “friends of the matinee”), the relaunch of MST3K will occur on Netflix.

The announcement was made during an MST3K panel discussion that was held at the San Diego Comic-Con in July, according to Alex Osborn’s IGN article on the return of the series.  The new MST3K will be available to stream on Netflix throughout the United States, Canada, the United Kingdom, Ireland, New Zealand and Australia.

It was announced that Bill Corbett, Mary Jo Pehl and Kevin Murphy will make cameo appearances in the reboot of the series, along with original host and series creator Joel Hodgson (according to an official Netflix press release).

Netflix: The new home of the MST3K reboot

The reboot of “Mystery Science  Theater 3000” will be part of Netflix and their stable of original television series offered on the streaming service.

SIDEBAR: “Silver Screen Reflections” hopes that the new MST3K will be a success on Netflix, with new riffs of other cheesy low-budget motion pictures.  When the new MST3K is released on the paid streaming video platform, it might be a good time to use the free month trial, which is good for one month (for those that haven’t used Netflix before).

Questions/Comments?  Drop a line at the comments section!

The iconic “satellite of love” will be launched back into orbit with cheesy movies, thanks to a successful online crowdfunding campaign. 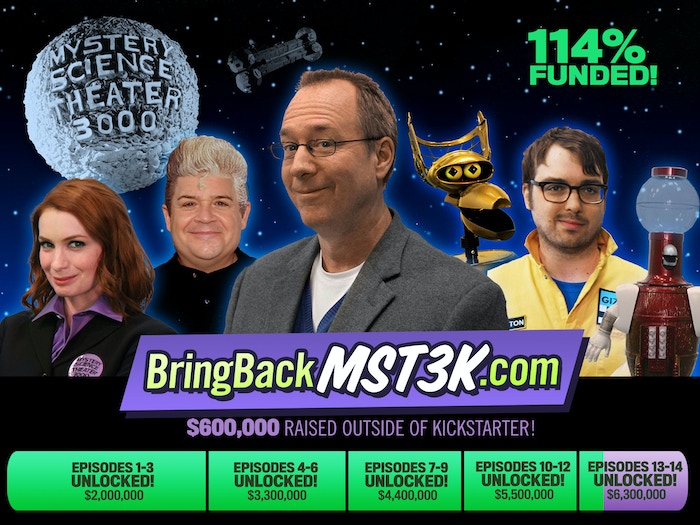 The “official” return of MST3K (and the successful Kickstarter campaign)

After being off the air for 16 years, the cult series “Mystery Science Theater 3000” will be coming back.  It was noted that series creator (and the first host of the series) Joel Hodgson had raised $6.3 million, exceeding the $5.5 million goal that was met on the Kickstarter deadline of Friday, Dec. 11.

The original proposal for the revival of MST3K was to have 12 new episodes of the series, but was expanded to 14 due to the overall success of the Kickstarter campaign.

According to William Hughes of A.V. Club, the “Bring Back MST3K” Kickstarter group generated the largest amount raised for a video/television series project through the use of crowdsourcing.

In addition to comedian Jonah Ray as the new host, who else will be in the new MST3K series (along with the bots, and will any original cast members return)?

According to Sara Morrison’s article on HitFix, comedian Felicia Day will be cast as one of the new “mads” in the series, portraying evil overlord Kinga Forrester, the daughter of Dr. Clayton Forrester.  Veteran comedian and actor Patton Oswalt will be cast as “TV’s Son of ‘TV’s Frank’.”

In addition to Joel Hodgson, there’s no word if any of the cast members from the original run of the series (Michael J. Nelson, Trace Beaulieu, Kevin Murphy, Frank Conniff, Mary Jo Pehl, Bill Corbett and J. Elvis Weinstein) will make cameo appearances in the new MST3K episodes.  Hodgson announced that all former cast members were more than welcome to make cameo appearances in new episodes.

Currently, Nelson, Murphy and Corbett are continuing their successful MST3K spin-off movie riffing venture, “RiffTrax.”  Beaulieu and Conniff have also started their own successful national movie riffing touring group in honor of their evil overlord roles on MST3K, “The Mads are Back!”

Here’s hoping that the new episodes of “Mystery Science Theater” will be a success- Season’s Greetings to all fellow MSTies!

The Mads are Back!