Mel Brooks’ “Young Frankenstein” (1974) to be re-released in select theaters on Oct. 5

One of the most celebrated spoof horror comedies of all-time is coming back to select cinemas across the nation to kick off October.

According to Fathom Events’ official press release, a special live introduction will be presented by Mel Brooks himself, on location at the Twentieth Century Fox studio lot in Hollywood, California. 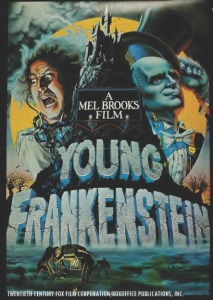 A notable cast of characters in Brooks’ comedic farce

“Young Frankenstein:” A perfect film to kick off the month of October

42 years after its general release, Mel Brooks’ “Young Frankenstein” still continues to delight audiences- both young and old.  It is one of many spectacular films to kick off the Halloween season.  For those that haven’t experienced Brooks’ farce on vintage horror, you will not be disappointed!

Another cult classic that is highly recommended from the writer of “Silver Screen Reflections.”

MATINEE ALERT: Though “Young Frankenstein” was shown during its general release in the Frederick area back in 1974, Fathom Events’ special revival screening will not be shown in the Frederick area.   Here are some nearby theaters that will be participating in this event throughout the region:

Turner Classic Movies will be showing Mel Brooks’ “Young Frankenstein” as part of “Ouch! A Salute to Slapstick” on Tue., Sept. 27 at 9:30 p.m. Eastern and during the network’s tribute to the late Gene Wilder on Thurs., Sept. 29 at 9:15 p.m.

Questions/Comments?  Drop A Line at the Comments section!

SIDEBAR (For all posts): The author of this site does not endorse any WordPress political advertisements.