Fellow Svengoolie SvenPals from coast-to-coast will be jumping for joy for his big broadcast of a Columbia Pictures cult sci-fi creature feature classic.

“Svengoolie” presents his big broadcast of “The Giant Claw” (1957) 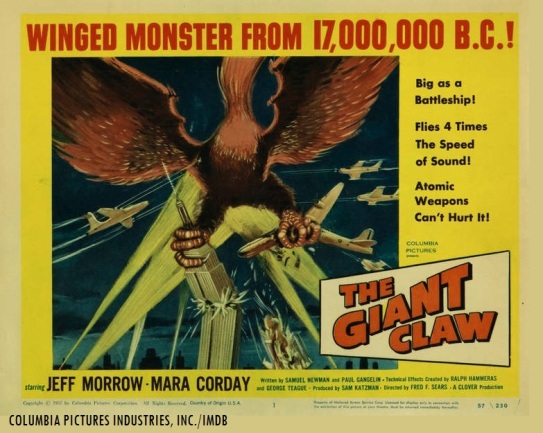 The legendary Berwyn/Chicago-based sci-fi/creature film host will present his big broadcast of “The Giant Claw” (1957), this Sat.; Aug. 31 at 8 p.m. Eastern/7 p.m. Central on Me-TV.

Both Katzman and Sears were known for their Columbia productions throughout the 1950s, including “The Werewolf” (1956); with Steven Ritch, Joyce Holden and Don Megowan, “Rock Around the Clock” (1956); with The Platters, Bill Haley’s Comets and disc jockey Alan Freed, the Ray Harryhausen–Dynamation production of “Earth vs. the Flying Saucers” (1956); with Joan Taylor and Hugh Marlowe, “Don’t Knock the Rock” (1956); with Little Richard, Alan Freed and Bill Haley’s Comets, “Calypso Heat Wave” (1957); with Maya Angelou, Joel Grey and Johnny Desmond and  “The Night the World Exploded” (1957); with Kathryn Grant and William Leslie.

“The Giant Claw” was originally released as a double-feature presentation in most theatrical venues with the additional 1957 Columbia sci-fi production from Katzman and Sears, “The Night the World Exploded;” according to the original 1957 Columbia Pictures exhibitors’ trade ad that was featured in BoxOffice Magazine.

Who was in the 1957 Sears-Katzman-Columbia sci-fi creature feature classic?

The players who appeared in “The Giant Claw” (1957) were Jeff Morrow (as Mitch MacAfee; Morrow also appeared in two Universal Studios sci-fi/monster/creature productions, including 1955’s “This Island Earth” and 1957’s “The Creature Walks Among Us”), Mara Corday (as Sally Caldwell; Corday previously appeared in the 1955 Universal production of “Tarantula” and in the 1957 Warner Bros. production of “The Black Scorpion”), Morris Ankrum (as Lt. Gen. Edward Considine, Ankrum also appeared in the 1957 Harryhausen-Katzman-Sears-Columbia production of “Earth vs. the Flying Saucers”), Robert Shayne (as Gen. Van Buskirk), Clark Howat (as Maj. Bergen), Louis Merrill (as Pierre Broussard), Edgar Barrier (as Dr. Karol Noymann),  Frank Griffin (as Pete, the actor was credited under the pseudonym name of Ruell Shayne in the film)*,  Morgan Jones (as a lieutenant) George Cisar (in an uncredited role as an airplane passenger, Cisar previously appeared in the 1956 Katzman-Sears Columbia production of “The Werewolf”), an uncredited cameo vocal appearance by Fred F. Sears (as the narrator) and Robert B. Williams (in an uncredited role as a state trooper).

Filmed in a brief period of time

The Katzman-Sears-Columbia production of “The Giant Claw” was filmed in less than nine days on a tight budget, according Richard Harland Smith’s article on the 1957 Columbia sci-fi feature for Turner Classic Movies.  The majority of the expenses on the 1957 sci-fi feature were spent by Katzman on the special effects and the “Giant Claw” creature marionette model design, which was constructed in Mexico.  The designer of the “Giant Claw” creature marionette has not been revealed as of this day.

Additional stock footage elements from the 1956 Ray Harryhausen–Sam Katzman–Fred F. Sears–Columbia production of “Earth vs. the Flying Saucers” were used in “The Giant Claw” (1957).

In addition to the special effects in “The Giant Claw,” additional stock footage elements were used from the Ray Harryhausen-Sam Katzman-Fred Sears-Columbia production of “Earth vs. the Flying Saucers” (1956); according to IMDB.

Both Jeff Morrow and Mara Corday did not see the finalized “Giant Claw” creature marionette until the sneak preview screening of “The Giant Claw,” according to addition details from Richard Harland Smith’s TCM article.  The two lead actors were not fond of the overall design, mostly due to the model creature creation as a result of budget constraints.  Morrow recounted that the “Giant Claw” sci-fi creature marionette had a resemblance of a turkey.

Though Katzman and Sears’ 1957 Columbia sci-fi creature feature became a cult classic, the film was snubbed by Hollywood film industry critics during the original theatrical release; according to according to film historian Clive Hirschorn’s retrospective book on Columbia Pictures, “The Columbia Story.”

Be sure to watch/record Svengoolie’s big broadcast of “The Giant Claw” (1957), this Sat. on Me-TV!

Pilots of the Me-TV airlanes from Berwyn and beyond! Svengoolie (portrayed by Rich Koz), Kerwyn and all fellow super SvenPals are all jumping for joy for his upcoming big broadcast showcase of “The Giant Claw” (1957), this Sat. on Me-TV!

Svengoolie presents his big broadcast of “The Giant Claw” (1957)

Live-tweet with all fellow coast-to-coast super SvenPals everywhere this Sat. via Twitter during #Svengoolie’s big broadcast of “The Giant Claw” (1957) on Me-TV!

Be sure to spread the word/donate generously/help out one of the friends of fellow super Svengoolie SvenPal Jamie Lee from the PM&L Theatre troupe by giving whatever you can/spreading the word to her PM&L friend’s official “GoFundMe” fund website to help offset astronomical costs of additional medical-related treatments.  Any amount helps! Spread the word/donate generously to help out one of Jamie’s PM&L friends! –C.H.

Questions/comments about “Svengoolie” and/or his big broadcast of “The Giant Claw” (1957)?  Drop a line in the comments section!

Note: The author of “Silver Screen Reflections” does not endorse any advertisers on WordPress’ site platform.